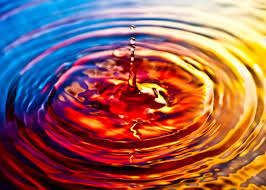 Last week’s blog was my interview with Ruth Driscoll -TEDx speaker, aka The Life Liberator.  If you didn’t read it – you can check it out here.

In the interview, Ruth mentioned something very profound – which is the ripple effect.  It’s something we don’t think about enough.  You know all about the ripple effect right?  When you drop a stone into the water – it causes ripples that radiate outwards.  The Oxford English dictionary says the ripple effect is the continuing and spreading results of an event of an action.

Those ripples can be positive or negative but they always happen.  When given the opportunity to do something like give a TEDx talk, most ask self-focused questions like “Could I do it?”, “What should I talk about?”, or “Am I good enough”.  And all that is completely understandable.  If people do think about the ripple effect at all, it might be about them.  “What will happen if this goes well/badly?”, “How might this be good for my career/business?”

What they rarely think about is the effect on other people.

If we only knew the effect of our actions BEFORE we do them it would be easier to make the decision to do it (or not do it).  Even on those days when you feel like you aren’t enough, you haven’t accomplished enough, or you aren’t important enough,  the actual truth is that you are always enough, and there is always an opportunity to make a difference in your own life or that of someone else.

Rosa Parks – when she refused to give her seat on a Montgomery, Alabama bus on December 1st, 1955, she didn’t know she was going to inspire Martin Luther King and that she was, in effect, creating the civil rights movement. She did know though, that change had to come, and that she was no longer prepared to let things pass.  She didn’t have time to second guess her decision.

It is often when we have time to think, that we talk ourselves out of doing what we could do, of ignoring that opportunity, of turning away from our opportunity to shine.  But what an amazing thing it was that Rosa acted out of instinct, and what an amazing ripple effect she created.

When you get the opportunity to speak, you never know who is going to hear you, and what effect your story is going to have on someone else.  You have a duty to get out of your own way and get your message out there for the benefit of others.  Such is the power of a story.  Whatever your story is – however uninteresting you believe it to be, it has the power to change lives.  Ruth’s story has changed many lives and continues to do so.

After finding a $20 bill in a car park Myles Eckhert did what few kids or adults do. He gave it to a customer — a soldier, Lt. Col. Frank Dailey — with this note:

“Dear Soldier — my dad was a soldier. He’s in heaven now. I found this 20 dollars in the parking lot when we got here. We like to pay it forward in my family. It’s your lucky day! Thank you for your service. Myles Eckert, a gold star kid.”

It didn’t take long for this story to go viral and Myles ended up on  Ellen and met former President George W. Bush at his presidential library. After a year his family created a nonprofit organization called the Power of 20 with the goal of giving on an even greater scale to charities and families in need — all with the help of everyday people inspired by Myles’ one small but great act.

The story of what he did inspired many people.  But if he had inspired only 1 person, it would still have been worth doing and a story worth telling.
The next time opportunity comes knocking – don’t hesitate, don’t second guess yourself.  Get out there and make a difference – like Ruth.